These are the smallest of the bearded irises, with stems from 2" to a maximum of 8" in height. These tiny iris are very effective in the rock garden. They are the first of the bearded iris to bloom in early spring, often in late February in the Pacific Northwest. MDB irises should be planted in clumps for best effect and are quite effectively used in rockeries and as perennial bed borders.

Intermediates grow from 16" to 27˝" and have their peak bloom after the SDB irises but before the TB's. These are some of the most useful plants we have for the garden. Because they were created by crossing SDB irises with TB irises they also carry the patterns and colors of both dwarfs and TB's. They will produce at least two branches and have flowers in proportion to their smaller plant size.

This class has the most strict classification as defined by the American Iris Society (AIS). The height range is 16" to 25" with a height of 21" to 22" preferred. The class is distinguished by daintiness and delicacy. The blooms are small and carried on slender, wiry, flexuous stems. The MTB irises are often called "table iris" because they are quite well suited for floral arrangements.

This group is the same height range as the IB irises (16" to 27˝") but bloom at the same time as the TB irises. The entire plant (bloom, stalk and foliage) will be a proportionately smaller version of a TB. Growing conditions or different climactic zones may cause them to grow out of proportion defined by the class.

This is the most commonly known classification of bearded irises and is typically what most folks think of when irises are mentioned. These irises have flower stalks over 27" in height. A vigorous hybrid will be well branched and have many buds. This class has a wide range of colors and patterns and generally displays special features such as ruffles and lacing.

The largest of the Aril iris are native to Israel at the south end of the Dead Sea. They are also found in Iran, Jordan, Turkey and north into Russia. The oncocyclus subspecies have one bloom on 6" to 19" stems, while the regelia subspecies more often has two flowers on 9" to 22" stems. Flowers come in a wide range of colors with veins, dots, spots or signals. Arilbred iris are products of crosses between bearded and aril iris. They are generally have easier cultivation requirements and are a bit hardier in moist climates. OGB-, OGB, and OGB+ signify whether an Arilbred is one quarter aril, half aril or three quarters aril, respectively. 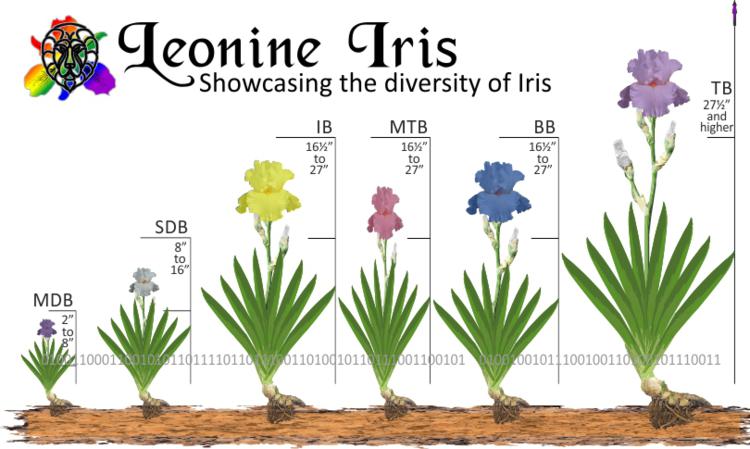